is a complete probability space, then the projection of any measurable subset of

is measurable. To be precise, the condition is that S is in the product sigma-algebra

denotes the Borel sets in

. Although it looks like a very basic property of measurable sets, maybe even obvious, measurable projection is a surprisingly difficult result to prove. In fact, the requirement that the probability space is complete is necessary and, if it is dropped, then

need not be measurable. Counterexamples exist for commonly used measurable spaces such as

. This suggests that there is something deeper going on here than basic manipulations of measurable sets.

The techniques which will be used to prove the projection theorem involve analytic sets, which will be introduced in this post, with the proof of measurable projection to follow in the next post. [Note: I have since posted a more direct proof of measurable projection and section, which does not make use of analytic sets.] These results can also be used to prove the optional and predictable section theorems which, at first appearances, seem to be quite basic statements. The section theorems are fundamental to the powerful and interesting theory of optional and predictable projection which is, consequently, generally considered to be a hard part of stochastic calculus. In fact, the projection and section theorems are really not that hard to prove, although the method given here does require stepping outside of the usual setup used in probability and involves something more like descriptive set theory.

Let us consider how one might try and approach a proof of the projection theorem. As with many statements regarding measurable sets, we could try and prove the result first for certain simple sets, and then generalise to measurable sets by use of the monotone class theorem or similar. For example, let

denote the collection of all

. It is straightforward to show that any finite union of sets of the form

. If it could be shown that

is a sequence of subsets of

then from the definition of the projection map,

for each n, this shows that the union

. Unfortunately, decreasing sequences are much more problematic. If

However, this identity does not hold in general. For example, consider the decreasing sequence

for all n, but

is empty, contradicting (1). There is some interesting history involved here. In a paper published in 1905, Henri Lebesgue claimed that the projection of a Borel subset of

is itself measurable. This was based upon mistakenly applying (1). The error was spotted in around 1917 by Mikhail Suslin, who realised that the projection need not be Borel, and lead him to develop the theory of analytic sets.

Actually, there is at least one situation where (1) can be shown to hold. Suppose that for each

are compact. For each

is a decreasing sequence of compact sets, so has nonempty intersection. Then,

and (1) follows. This argument is connected to the use of compactness in the definition of analytic sets given below. However, the compactness property will not be central to any of the arguments here and, in fact, all the results stated below would hold if it is dropped, but it will be a vital part in the proof of the projection theorem in the next post.

, in addition to requiring that

is measurable, we include constraints that ensure that

is closed under limits of increasing and decreasing sequences. One way of achieving this is to let

be the collection of

-analytic sets, as defined below.

Roughly, then, the outline of the proof of the measurable projection theorem the following:

The first point is proven below in corollary 4, and relies on showing that countable unions and intersections of analytic sets are analytic. The second point is stated as theorem 2, and is a direct consequence of the definitions. Finally, the third point uses Choquet’s capacitability theorem, and will be left until the next post.

One issue with introducing the concept of analytic sets is to settle on which definition to use. The fact that there are many different looking, but equivalent, ways of defining them just shows how they are a fundamental and flexible idea. Often, they are introduced as specific to Polish spaces. We would prefer not to restrict to this setting here. Alternatively, they can be defined using the Suslin operation. However, I will follow Bichteler (Stochastic Integration With Jumps, 2002), which seems to be one of the most direct approaches for our purposes.

I now introduce a bit of notation. The term paving on a set X will be used to denote, simply, any collection of subsets of X. Then, for a paving

on a set X, the pair

will be referred to as a paved space. Examples of paved spaces include any topological space with the paving given by either its open or its closed subsets, and any measurable space where the paving is a sigma-algebra. For a paving

to represent its closure under, respectively, countable unions and countable intersections.

It is clear that

We say that a paving

is compact if every

with empty intersection has a finite subset

with empty intersection. For example, a Hausdorff space together with its compact subsets is a compact paved space. For two paved spaces

to denote the paving on the Cartesian product

consisting of the sets

. It is straightforward to show that the product

is itself compact. Finally, for any two sets X and Y,

will be used to denote the projection

be a paved space. Then, a set

-analytic if and only if there exists a compact paved space

This definition makes use of an auxilliary compact paved space. It does not matter at the moment what this space might be, but it is possible show that it is always possible to take, for example,

to be the collection of closed bounded intervals.

to denote the collection of all

. Clearly, every element of

From the definition of

, the set S in definition 1 can be expressed as

. This can be rearranged as

Consider the set C of

is nonempty. Compactness of the paving

ensures that C is closed in the product topology. The set

can then be expressed purely in terms of the closed set

This shows that the precise details of the auxiliary paved space in definition 1 are not important, and all that matters is which subsets of

have nonempty intersection. Note that the union in (3) need not be countable, so we cannot infer the measurability of A.

As was promised, we show that projections of analytic sets are analytic. This is a direct consequence of the definition.

be paved spaces, with

compact. Then, for any

Proof: As S is analytic, there is a compact paved space

are compact, it follows that

We move on to the main statement and proof of this post, that countable unions and intersections of analytic sets are analytic. For a metric space X with collection of closed sets

, this can be used to show that all Borel sets are both

-analytic. Similarly, for a pair of measurable spaces

, it shows that product sigma-algebra

be a paved space and

. We outline two different ways to embed the pavings

into a larger paved space

, which, respectively, will lead to the representation of the union and the intersection of the

. This comes with projections

It can be seen that

is a compact paving. Consider a collection of sets

runs through some index set I. The intersection is

is empty. By compactness of

, this shows that there is a finite

. If follows that, for

, we have that an

if and only if, for all n, there is a

, this is equivalent to the existence of a

such that, for all n,

Next, consider the disjoint union

. This comes with inclusion maps

which are one-to-one and

It can be seen that this definition of

also gives a compact paving. Consider a collection of sets

runs through some index set I. If

for some j and k, then

giving a finite subcollection with empty intersection. On the other hand, if

for some fixed n and all k then

For this to be empty, the intersection of the

must be empty so, by compactness of

for a finite subset

can, by definition, be expressed as

be the inclusion maps

is one-to-one, it follows that

The union of the sets

can be written as, 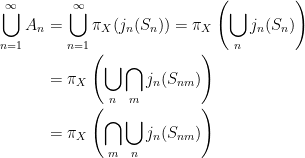 is one-to-one and the images of

Suppose, for example, that X is a metric space and

be a paved space such that

Proof: As we know from theorem 3 that

is closed under countable intersections and unions, this is a standard argument. Consider the collection

. From the condition that the complement of every

, the union will be in

by theorem 3, with complement,

which is again in

is closed under countable unions and under complements, so is a sigma-algebra containing

on the pavings of a set X is a closure operator.

The first two statements are immediate from the definition. For the third statement, we start with the following simple lemma.

Lemma 5 For any two paved spaces

for a compact paved space

Finally, we show that

is a closure operator.

be a paving. Then, a set

-analytic if and only if it is

is immediate from the definition of analytic sets, or from (2). For the reverse inclusion, suppose that

for some compact paved space

One thought on “Analytic Sets”