We start with a version of optional stopping which applies for quasimartingales. For now, we just consider simple stopping times, which are stopping times taking values in a finite subset of the nonnegative extended reals

. Stopping a process can only decrease its mean variation (recall the alternative definitions

for the mean variation). For example, a process X is a martingale if and only if

, so in this case the following result says that stopped martingales are martingales.

Lemma 1 Let X be an adapted process and

be a simple stopping time. Then

Assuming, furthermore, that X is integrable,

Proof: We start by proving (3), and (2) is a simple corollary of this. From lemma 6 of the previous post on quasimartingales, the mean variation can be expressed as

where the supremum is taken over elementary processes

is a simple stopping time, this is elementary and,

The reverse inequality is just the triangle inequality, so we obtain (3).

is finite, otherwise the result is trivial. Then, X is integrable. Extend X to all times in

The supremum is over all elementary processes

with time index running over

to this index set, by setting

Theorem 2 Let X be a cadlag adapted process and K be a nonnegative real. Then,

Proof: For any finite

The final inequality here is an application of lemma 1. Now, let

be a countable dense subset of

be a sequence of finite subsets of

Next, we look at stochastic integrals with respect to elementary integrands. From the mean variation of a process, it is not possible to give

Lemma 3 There exists a constant

such that, for any elementary predictable process

Proof: I will prove this by extending Lemma 4 from the post on martingales as integrators, which says that there is a

is finite so that X is integrable, otherwise the result is trivial. Now, there exists a sequence of times

is a martingale restricted to the index set

for the discrete integral

Similarly, we can bound the martingale M in

Hence, as stated above,

So the result follows by replacing

Next, the mean variation behaves as we would expect under

be integrable adapted processes such that

as n goes to infinity. Then,

be an elementary process on time index set

gives the inequality for

follows in the same way, except that we set

range over the elementary processes with time index set

The optional stopping result, Lemma 1, can be extended to arbitrary stopping times. The proof will require approximating by simple stopping times and taking limits in

but, before doing this, we will need to know that such approximations converge in

. To that end, we extend lemma 6 of the post on cadlag modifications to the quasimartingale case. This requires a filtered probability space

. For an integrable process defined on such a space, we define the mean variation as

The supremum is taken over all finite sequences

. Then, the following lemma holds.

is uniformly integrable for any decreasing sequence

Monotone convergence shows that this is integrable and, in particular, is almost surely finite

So, the following sum is almost surely convergent, and converges in

is uniformly integrable. Then, from the definition of

is satisfied and the sequence

is uniformly integrable. So,

is a uniformly integrable sequence. ⬜

Lemma 6 Let X be a right-continuous adapted process and

be a stopping time. Then

Assuming, furthermore, that X is a quasimartingale, then

Proof: For the first inequality we can assume without loss of generality that

as n goes to infinity. We show that

be the negative integers and set

. We can show that

is finite. For any decreasing sequence of positive integers

is the elementary process

Hence the previous equation has expectation bounded by

. Lemma 5 then says that the sequence

is uniformly integrable so, by right-continuity of X, converges to

The reverse inequality is the triangle inequality, giving (6), and (5) follows immediately from this. ⬜

An immediate consequence of this is that the class of quasimartingales is stable with respect to localization.

Lemma 7 If X is a cadlag quasimartingale, then so is

for any stopping time

Lemma 8 A cadlag process X is locally a quasimartingale if and only if it is a locally integrable semimartingale.

Proof: First, if X is a cadlag quasimartingale then we can define stopping times

is a quasimartingale and, hence, integrable. Then,

Conversely, suppose that X is a locally integrable semimartingale. As shown previously, this means that we can decompose

for a local martingale M and predictable FV process A. Letting

be the variation of A on the interval

is predictable and, hence, V is locally bounded. Then, we can find stopping times

increasing to infinity such that

is a martingale, and

has uniformly bounded variation. For any elementary

The martingale convergence theorem also extends to quasimartingales, as we show now.

. Then, almost surely, the limit

exists and is finite.

converges almost surely as t goes to infinity, so

As was noted in the initial post on quasimartingales, the mean variation

is bounded by the expected value of the pathwise variation. However, in general we just get an upper bound and not equality. As we now show, equality is attained in the case of predictable FV processes.

Lemma 10 If X is an integrable and predictable FV process then,

Proof: By Lemma 5 of the quasimartingale post, we know that (7) holds with the inequality

in place of the equality. So, it just remains to prove the reverse inequality

To start with, we will suppose that X has integrable variation on

. There exists a predictable process

will just decrease the left hand side of the above limit, so we can assume that

. Using dominated convergence and the integral definition for

This gives (8) in the case that X has integrable variation. More generally, the variation of X will be locally bounded, so we can find stopping times

increasing to infinity such that the stopped process

The limit here is taking

and using monotone convergence. This proves (8). ⬜

Finally for this post, we show that mean variation is well behaved under taking limits in probability, rather than the much stronger convergence in

of Lemma 4. Although the following result seems simple, and is reminiscent of Fatou’s lemma, it is rather stronger than it might seem at first sight. For example, it does not hold if

. It is not difficult to construct an

) which converges in probability to a non-martingale

. Such examples are given by stopping local martingales which are not martingales. The following result does however show that the limit of such a sequence is a quasimartingale — see corollary 12 below.

be a sequence of adapted processes such that, for each

in probability as n goes to infinity. Then,

Before proceeding with the proof of this theorem, I will first note an alternative method of proof which gives the result quickly in an intuitive way, although making it rigorous involves more work. We may assume that the right hand side of (9) is finite, otherwise the result is trivial. Then, the statement is unchanged if we restrict to a subsequence for which

Rao’s theorem says that we can decompose each

, of nonnegative supermartingales for which

converge in probability to limits Y,Z, then

. Fatou’s lemma can be used to show that Y,Z are nonnegative supermartingales and,

A difficulty with this approach is that

need not converge to a limit, although it is possible to enforce this property by passing to convex combinations of the sequence and using Komlós’s subsequence theorem (J. Komlós: A Generalization of a Problem of Steinhaus, Acta Math. Hung. 18 (1967), 217-229.)

The proof of theorem 11 which I give now is a bit longer, but does not require any results such as Komlós’s theorem or Rao’s decomposition. Instead, it just uses several applications of Fatou’s lemma.

then, as shown previously in the post on quasimartingales, the mean variation can be expressed as

where the supremum is taken over all elementary processes

on the index set

. It is tempting to proceed by applying Fatou’s lemma

However, Fatou’s lemma requires non-negative integrands, which is not the case here, and the first inequality above does hold in general.

Instead, we will proceed by breaking down the left hand side into non-negative terms to which Fatou’s lemma does apply. First, we can restrict to the case where the right hand side of (9) is finite, otherwise the result is trivial. Then, we restrict to the subsequence where

, as this does not affect the statement of the result.

For any t, Fatou’s lemma gives

So, X is integrable.

are non-negative, so Fatou’s lemma can be applied to this

The final inequality here is just the triangle inequality. So, we can take expectations of (10) and again apply Fatou’s lemma

are fixed times and 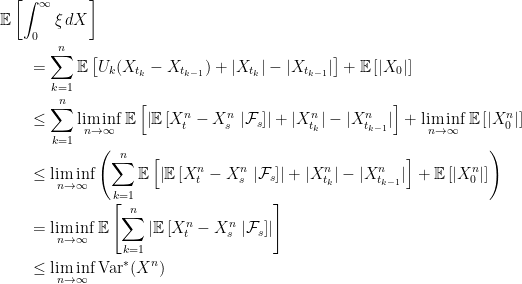 As was mentioned above, this result shows that limits of

) be a sequence of martingales, such that

goes to infinity. Then

is bounded for each

Proof: By theorem 11 applied to the processes

stopped at time t, together with the martingale property,

5 thoughts on “Properties of Quasimartingales”