Martingale inequalities are an important subject in the study of stochastic processes. The subject of this post is Doob’s inequalities which bound the distribution of the maximum value of a martingale in terms of its terminal distribution, and is a consequence of the optional sampling theorem. We work with respect to a filtered probability space

. The absolute maximum process of a martingale is denoted by

. For any real number

-norm of a random variable

Then, Doob’s inequalities bound the distribution of the maximum of a martingale by the

-norm of its terminal value, and bound the

-norm of its maximum by the

-norm of its terminal value for all

be a cadlag martingale and

of martingales converges to a limit

. It is clear that

for any process and, consequently Doob’s second inequality above shows that this topology is equivalent to the seemingly much stronger condition that

The second statement above does not extend to

to give a bound for

. Instead, we have the rather weaker third statement above, which requires

to be integrable in order to give a nontrivial upper bound. In fact, there exist martingales X such that the maximum

has infinite expectation at all positive times even though, by definition,

I briefly note that the third inequality looks a bit odd, as it is not dimensionally consistent. This means that, unlike the other two, applying it to

for positive a gives a slightly different inequality. Specifically, applying it to

and dividing through by a gives

where c is equal to

. The optimal value occurs at

This is dimensionally consistent — replacing X by

scales both sides by a. Furthermore, as

is bounded above by 1, it is stronger in this form than as stated in Theorem 2. However, the versions stated above are simpler, and the important thing is that they have the same coefficient for the dominant term

To prove Theorem 2, we start with the following submartingale inequality from which each of Doob’s inequalities will follow.

Proof: By completing the filtration if necessary, without loss of generality we assume that it is complete. Consider the first time at which the process reaches a positive value

which, by the debut theorem, is a stopping time. Then

We use (1) to prove Doob’s inequalities.

Proof of Theorem 2: Bounding the right hand side of (1) by

gives the first inequality. Next, for

and integrate up to a limit 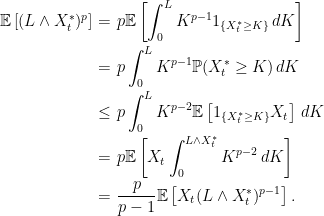 Substituting into the previous inequality,

from both sides and take the limit

to get the second inequality in the statement of the theorem.

Now, multiply both sides of (1) by

and integrating over a range 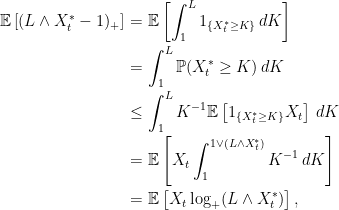 . As we will show in a moment, the inequality

to both sides of the previous inequality and applying (2) with

from both sides and take the limit

to get the third inequality of the theorem.

It only remains to show that (2) holds for all nonnegative reals x and y. Moving all the terms to the same side, the inequality is equivalent to

By differentiating with respect to x, the minimum of the left hand side occurs at

, at which it takes the value