In this post, I will mainly be concerned with the definition and very basic properties of quasimartingales, and look at the more advanced theory in the following post. We work with respect to a filtered probability space

. It is not necessary to assume that either of the usual conditions, of right-continuity or completeness, hold. First, the mean variation of a process is defined as follows.

Here, the supremum is taken over all finite sequences of times,

A quasimartingale, then, is a process with finite mean variation on each bounded interval.

Definition 2 A quasimartingale, X, is an integrable adapted process such that

is finite for each time

Before going further, I’ll briefly mention that the definition of quasimartingales given by different authors do differ slightly, and is often more restrictive than the one above. This should be noted before comparing the precise statement of the results given here with those stated in some other texts. It is sometimes required that the mean variation is uniformly bounded on all of

and, also, that the process is

bounded. Furthermore, some authors require right-continuity. The definition given here is equivalent to that used by Métivier (Semimartingales: a course on stochastic processes). An immediate consequence of Definition 2 is that all martingales, submartingales and supermartingales are also quasimartingales.

Proof: Replacing X by –X if necessary, we can suppose that X is a submartingale. Then,

almost surely. So, the absolute value signs can be removed from (1) and, by linearity of expectations, the right hand side of (1) reduces to (2) regardless of the choice of partition. In particular, the mean variation is finite on each bounded interval, so X is a quasimartingale. ⬜

However, unlike sub- and super-martingales, the space of quasimartingales is closed under taking linear combinations, so forms a vector space.

Lemma 4 The space of quasimartingales is closed under taking linear combinations. Furthermore,

forms a family of seminorms on the space of quasimartingales. Before moving on to the proof of Lemma 4, I’ll define the following simple bit of notation, just to keep the formulas in the remainder of the post reasonably short. Given a process X and a sequence of times

will be used to denote the increments of X across the given time steps. Now, moving on to the proof of Lemma 4.

Proof: Equation (3) is simply the result of substituting

in place of X in (1). If X is a quasimartingale then

has finite mean variation on bounded intervals and, hence, is also a quasimartingale.

Equation (4) is the result of substituting

So, in particular, if X and Y are quasimartingales then so is

Lemma 5 If X is an integrable FV process then,

In particular, if X has integrable variation over each finite interval

then it is a quasimartingale.

Proof: We can compute the mean variation over

by taking the supremum of (1) over all sequences 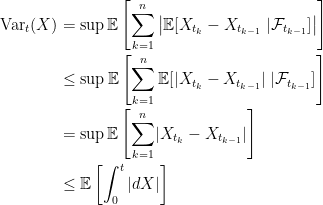 The mean variation can alternatively be defined via stochastic integrals of elementary predictable integrands. In practise, I usually find this definition slightly easier to work with than the one given above.

Proof: For any partition 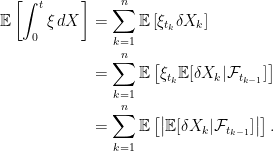 Taking the supremum over all such partitions shows that (6) holds with equality replaced by ≤. To prove the reverse inequality, consider any elementary

such that, on each interval

-measurable value. Then, if 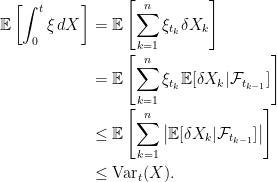 As mentioned above, some texts require quasimartingales to be right-continuous or cadlag. This requirement is actually rather weak, as just right-continuity in probability is sufficient to guarantee the existence of cadlag modifications.

Theorem 7 Every quasimartingale which is right-continuous in probability has a cadlag modification.

Proof: This is stated by Theorem 1 of the post on cadlag modifications. Note that, by Lemma 6 above, the first condition in the statement of that theorem is equivalent to X being a quasimartingale. ⬜

Another immediate consequence of Lemma 6 is that, as with martingales, the space of quasimartingales is closed under the integration of bounded elementary processes.

Lemma 8 If X is a quasimartingale and

for a bounded elementary process

, then Y is a quasimartingale. Furthermore, if

for a constant K, then

for any elementary process

then (7) is trivially true. Otherwise, if

Here, Lemma 6 gives the inequality. Then taking the supremum over all elementary

and applying Lemma 6 to the left hand side gives (7). In particular, Y is a quasimartingale. ⬜

It should be immediate, either from Definition 1 or Lemma 6, that

is an increasing function of t. This means that the mean variation on

can be defined by taking the limit as t goes to infinity which, by Lemma 6, is given by

Here, the supremum is taken as

runs through the space of elementary processes with

. This is always satisfied by martingales, where

being finite is equivalent to

being a bounded function of t. The requirement for

to be finite is used as part of the definition of quasimartingales in some texts, such as Rao’s original paper (Quasi-martingales, 1969) and in Dellacherie & Meyer (Probabilities and Potential B), where it is referred to as a quasimartingale on

An alternative definition which is sometimes used for the mean variation of an adapted integrable process, and which I will denote by

Definition 9 If X is an integrable process on the interval

is not integrable for any

As I show below,

it is an increasing function of t so that, for any

holds. So, extending to non-integrable processes on

makes sense, and preserves this inequality, Also, by monotonicity in t, the limit

is well-defined. This is sometimes called the mean variation of X on the interval

(see equation (9) below). Also, it follows from Lemma 4 that

is a seminorm on the space of all adapted processes satisfying

. That is, for adapted processes X and Y, and

By Lemma 3 it can be seen that, for sub- and super-martingales, the condition

is equivalent to X being

bounded. Many texts on the subject impose the, rather strong, condition on quasimartingales that

is finite. This is the case, for example, in Protter (Stochastic Integration and Differential Equations), Rogers & Williams (Diffusions, Markov Processes, and Martingales), Kallenberg (Foundations of Modern Probability), He Wang & Yan (Semimartingale Theory and Stochastic Calculus), and also in Dellacherie & Meyer (Probabilities and Potential B) where it is referred to as a quasimartingale on

is indeed increasing in t. Compare the similarity between equation (9) below and (8) above. The only difference now is that the elementary integrand

takes values on the whole of the nonnegative extended real numbers,

Lemma 10 If X is an integrable adapted process then

is increasing in t. Furthermore, if we extend X to be a stochastic process with index set

Here, the supremum is over all elementary processes

The supremum is taken over all

-measurable random variables U with

, and the maximum is attained at

with the supremum taken over all elementary processes

both bounded by 1. Let

denote the set of elementary processes

, and which are constant on the interval

can be written in the form

. Finally, taking the supremum over

is just the set of elementary processes

can be expressed in terms of partitions of the interval

, similar to the way we defined the mean variation above.

Corollary 11 If X is an integrable adapted process, then

Here, the supremum is taken over all finite sequences of times

and we extend X to a process on

Proof: This follows in exactly the same way as Lemma 6 above, showing that the right hand side of equations (11) and (9) agree. The only difference here is that we apply the argument on the closed interval

instead of the closed bounded interval

but, otherwise, it is unchanged. Then, Lemma 10 shows that that this is equal to