Fubini’s theorem states that, subject to precise conditions, it is possible to switch the order of integration when computing double integrals. In the theory of stochastic calculus, we also encounter double integrals and would like to be able to commute their order. However, since these can involve stochastic integration rather than the usual deterministic case, the classical results are not always applicable. To help with such cases, we could do with a new stochastic version of Fubini’s theorem. Here, I will consider the situation where one integral is of the standard kind with respect to a finite measure, and the other is stochastic. To start, recall the classical Fubini theorem.

be finite measure spaces, and

I previously gave a proof of this as a simple corollary of the functional monotone class theorem. Note that the first two statements regarding measurability of the single integrals are necessary to ensure that the double integral (1) is well-defined. There are various straightforward ways in which this base statement can be generalized. By simple linearity, it extends to finite signed measure spaces. Alternatively, by monotone convergence, we can extend to sigma-finite measure spaces and nonnegative measurable functions

, which need not be bounded.

A slight reformulation of Fubini’s theorem is useful for applications to stochastic calculus. Here, we work with respect to a probability space

be a finite measure space, and

be a uniformly bounded collection of processes such that

Proof: For each individual value of

, the integral with respect to

with s varying over the interval

is a finite signed measure. Hence, (4) is simply a restatement of Fubini’s theorem (1) with

. It only remains to prove measurability of the maps in (2) and (3), which are slightly stronger statements than that given by our application of Fubini’s theorem here.

-measurable by the first part of Fubini’s theorem, as required.

Measurability of (3) is a bit more tricky, and the dependence of X on

stops us from applying Fubini’s theorem as stated above. Instead, we go back to basics and apply the functional monotone class theorem. So, let

denote the collection of all jointly measurable and uniformly bounded functions

. The monotone class theorem says that all uniformly bounded

satisfying the requirements of the theorem are in

The result stated in theorem 2 only applies to FV processes, whereas stochastic integration is defined more generally for semimartingales. Generalizing to semimartingales does introduce some technical problems though. First, it is necessary that the integrand is predictable. That is, it should be measurable with respect to the predictable sigma-algebra

. So, we require a slightly stronger measurability condition than in theorem 2, but this is not too difficult. As usual, we work with respect to a filtered probability space

be a finite measure space and

be a uniformly bounded collection of processes such that

-measurable. Then, the process

is bounded and predictable.

Proof: It is clear that

is bounded, so it only needs to be shown to be predictable. As

-measurable, the first part of Fubini’s theorem as stated above says that

is a bounded predictable process and X is a semimartingale, then the integral

is only defined up to probability one. Therefore, asking if it is measurable with respect to x does not even make sense. Furthermore, the arbitrary choice of the value of the integral on an uncountable collection of zero probability events, one for each x, could affect the value of the integral over x. This is the old problem of choosing good versions of stochastic processes except, now, we are concerned with the path as the variable x varies, rather than the time index t.

be a measurable space and

be uniformly bounded processes satisfying the measurablity requirement of lemma 3. Then, there exists processes

almost surely, for each t and x, and such that

-measurable and is cadlag in t.

This result depends on choosing a good version of the stochastic integral, simultaneously for all values of x, which is a bit tricky, so is left until later. We can now give a precise statement of the generalization of Fubini’s theorem for stochastic integration with respect to a semimartingale.

be a finite measure space and

be a real-valued, bounded, and

is almost surely finite and,

In the statement, the fact that

is almost surely finite is required to ensure that the integral on the left of (6) is well-defined. Unlike in the FV case above, we do not know that

Before moving on to the proof of this theorem, there is a small ambiguity to be cleared up. We know that certain pathwise properties of stochastic processes, such as continuity, are sufficient to prove that the version is unique up to evanescence. Joint measurability is not sufficient by itself, so there will generally be many non-equivalent versions of the stochastic integral satisfying the conclusion of lemma 4. In fact, it does not matter which version is chosen in (6), as they will all give the same result when we perform the integral.

be collections of nonnegative random variables which are jointly measurable, in the sense that

almost surely, for each

then, with probability one,

To be precise, there exists

of probability one and, for each

, there exists a set

In particular, if the random variables are nonnegative then,

Proof: As the integral does not depend on the values of the integrand on a null set, the ‘in particular’ part of the theorem follows immediately from the first statement. We just need to show that, with probability one,

As any nonnegative random variable is almost surely zero, if its expected value is zero, we see that

almost surely. In this case,

be a measurable space and

be random variables for

-measurable and cadlag in t, for each positive integer n. Suppose that

is a collection of random variables such that

(uniform convergence on compacts in probability) as n goes to infinity, for each x.

has a version which is

-measurable and cadlag in t.

Proof: In order to measure the rate of convergence, consider the pseudometric defining the ucp topology,

which, by joint measurability of

Now, for any fixed

From the definition, this is jointly measurable and cadlag in t. For any

, choosing n such that

in the argument above shows that there exists an

which is cadlag in t and,

As this is the expectation of

this sum has finite expectation and, so, is almost surely finite for each x. Let

be the set on which the sum is finite. As

converges uniformly on compacts on this set, we can define

By construction, this is cadlag in t and is

-measurable. Furthermore, for each

almost surely. In particular, this means that

Lemma 7 can be applied to complete the proof of lemma 4.

Proof of Lemma 4: We will use the functional monotone class theorem, so define

to be the collection of bounded

satisfying the conclusion of the lemma. That is,

defined by (5) has a version which is jointly measurable and is cadlag in t. By linearity of the integral,

is closed under taking linear combinations. Next, for

Choosing a cadlag version of the stochastic integral, this is

By the monotone class theorem, it just remains to show that, if

is nonnegative and uniformly bounded sequence in

, increasing in n to a limit

, then the limit is also in

By the assumption that

-measurable and cadlag in t, for each n. We also choose a version of

which is cadlag in t, which is possible as stochastic integrals always have a cadlag version. By dominated convergence,

as n goes to infinity, for each x. Lemma 7 guarantees that

has a version which is both cadlag in t and

Proof of the Stochastic Fubini Theorem

I now give a proof of theorem 5. One method used, for example by Protter in Stochastic Integration and Differential Equations, is to decompose the semimartingale into FV and local martingale terms. It can then be proved separately for these two cases, and combined to give the full result. However, in keeping with much of my stochastic calculus notes, I take a different approach. This will avoid relying on any semimartingale decompositions, and keep closer to our original definition of stochastic integration. However, whichever way we go about it, handling the various limits does get a bit tricky. The main tool used here will be Ito’s formula. For a semimartingale X and twice continuously differentiable

In addition, we will suppose that

is bounded, along with its first and second order derivatives. If

is bounded by a constant

then, by Taylor expansion, the jump terms inside the summation in Ito’s formula can be seen to be bounded by

and, hence, we obtain the almost-sure bound,

Consequently, if we furthermore suppose that

for a predictable process

almost surely. The main part of the proof of theorem 5 consists of extending this inequality to incorporate an integral over the auxiliary parameter x.

Lemma 8 Let X be a semimartingale,

be a probability space, and

is the jointly measurable version of the integral, as given by lemma 4 then,

almost surely, for each

Proof: Note that all of the integrands in (8) are bounded and, hence, integrable. To prove the bound, we use the functional monotone class theorem. So, let

denote the set of all

bounded by 1 and for which (8) holds. We first consider

for a finite sequence of pairwise disjoint sets

, which are cadlag adapted processes,

which is jointly measurable as required. Then, 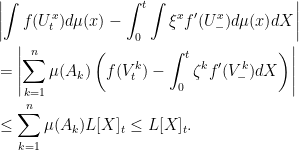 The first inequality here used (7), and the second used the fact that

is a sequence in

converging to a limit

as n goes to infinity. By dominated convergence, the integrals

. By the standard Fubini theorem, this gives

as n goes to infinity. So, by passing to a subsequence if necessary, we can assume that

In particular, this means that

has finite expectation, so is almost surely finite. Furthermore, when this is finite then

as n tends to infinity, uniformly over

almost all x. So, by dominated convergence, with probability one the limits

This shows that, if we let

consist of the bounded

satisfies the hypotheses for the monotone class theorem. Hence, every

which is bounded by 1 is in

I finally apply lemma 8 to complete the proof of theorem 5.

Proof of Theorem 5: By scaling, without loss of generality, we assume that

is a probability measure. Suppose that

and is twice continuously differentiable, with bounded derivative, and that

is bounded by L. Then, consider

. It can be seen that

is uniformly bounded over n and

almost surely. Furthermore, by bounded convergence, the second integral on the left hand side of (9) converges in probability to

is nonnegative, then applying monotone convergence for the first integral on the left hand side of (9) shows that (8) holds for

, for example, so that

is bounded, we see that

, in which case we can take

. Then, applying dominated convergence for the first integral on the left hand side of (9) gives

One thought on “The Stochastic Fubini Theorem”